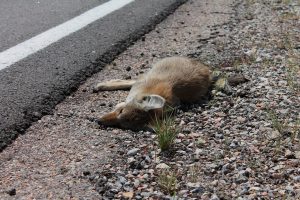 Hitting an animal while driving happens a lot, with deer involved in 90% of all the cases. Aside from the harm it can cause to animals, roadkill also causes expensive damage to a car. According to the High Country News, a driver will spend an average of $2,000 for roadkill damages on a vehicle.

With this, how can you avoid hitting animals while driving?

Being a defensive driver will help prevent roadkill. If you notice movements on a nearby bush, slow down and expect that a deer will come bolting to the middle of the road.

Defensive driving skills will save you, your car, and animal from harm. As much as you’re in a rush, taking it slow in a roadkill-prone area will save you from further hassle. Being on the lookout will help, especially at night.

Once you spot the animal from afar, slow down or stop until it crosses the road. You can also throw a biscuit into the side of the road to encourage the animal to keep off the lanes. If you perceive danger from the animal, honk or use your lights instead for the animal to move.

However, if you’re dealing with a moose, avoid honking or using your lights as this may stir aggression. Just slow down and wait until the animal gets off the road.

The common instinct of drivers is to swerve when an animal bursts into the road. Swerving is very dangerous and you’ll likely lose control of the vehicle. This will end up on a crash that can give you serious injuries.

Instead, stop or slow down while you wait for the animal to move. Stay in your lane and don’t make abrupt turns that may lead to accidents or animal aggression.

If you’re driving a long stretch at night with little to no traffic, use high-beam lights. This will increase your visibility on the road so you can spot animals from afar. Also, it’s a good way to alert animals that a vehicle is coming their way.

Watch out for the mating season

You should always be careful when driving during the mating season of animals. These months have higher wildlife activity and you will encounter numerous deer or moose on the road.

The breeding season starts every October and ends by December. For some deer species, it could be from January to February. As much as possible, avoid driving at night during these months.

Roadkill happens all year round. It’s responsible for thousands of animal deaths on the road. And for car owners, it’s a dangerous encounter that causes serious damages to their vehicles.

So for your safety and the animal’s welfare, always be vigilant while on the road.

How Often Should You Wax Your Car? How to Prevent Hitting Cyclists With Your Car
Scroll to top