The starter on your car begins the ignition process and ensures that your vehicle will have a smooth drive. If the starter starts to fail or experiences glitches, the engine may not turn over or ignite at all. It will affect the combustion chamber and the ignition system. In short, your vehicle won’t run with a failing starter. 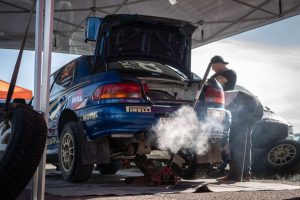 Although there are many warning signs, some drivers tend to dismiss it as some other irrelevant problem. To ensure that your car is always in tip-top shape, check for the following symptoms of a failing starter:

This is when you try to crank the engine, but the motor doesn’t engage. Instead, you’ll hear a whining noise. Such a situation means that the starting gear isn’t engaging properly with the car’s flywheel. Chances are your car won’t start unless you have the starter replaced.

When freewheeling happens in your car often, it’s best to have your car serviced. This way, the problem will be fixed before it sends your car bogging down in the middle of the road.

Grinding and strange noises coming from your car is always a sign that something’s wrong. It could be the starter or other parts that have gone out of place or needs a tune-up.

With a failing starter, the grinding noises are caused by the driving gear failing to engage correctly. It’s similar to the sound you hear when you accidentally hit the starter after pushing it the first time. Ignoring this problem will soon cause damages on the flywheel.

One guaranteed sign that your starter fails is when the car won’t start. This means that the component loses its ability to function. When you turn the key and nothing happens, it’s time to visit a mechanic.

Take note that failing to start the car could be due to a dead battery. Also, other electrical issues on the vehicle may affect the vehicle’s ignition even if the starter is totally fine.

Sporadic starting problems may seem harmless, but it’s actually the onset of more severe problems in the future. It’s a sign that your car’s starter is already failing. Sporadic ignition issues can also be due to dirty wiring.

If you’ve cleaned the wiring and the random ignition problem persists, it’s best to have the ignition checked. It’s best to have a proactive approach to these problems rather than having to push your car in the middle of the road when it bogs down.

Smell and smoke comes out when starting the car

If a burnt scent or smoke is coming out of your car in the wrong places whenever you start it, you should have the vehicle checked. It’s a sign of overheating and that your starter is beginning to fry.

Take note that this same problem can be due to a blown fuse, short circuit, and other engine problems. Again, it’s best to seek the help of a professional mechanic in these situations.