Cars are made of metal – that’s why they rust? The answer seems simple enough, but it’s a little more complicated if we consider what cars today are made of. 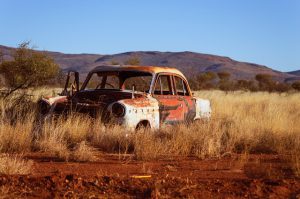 Rust is chemically composed of iron oxide. It forms when metals containing iron become exposed to oxygen and moisture for a prolonged period. Steel is often used in car frames and car panels due to its sheer strength, durability, accessibility, and flexibility. Unfortunately, it contains iron, which makes it prone to rust formation.

Most modern cars don’t use ordinary steel, however. They use galvanized steel, which is carbon steel that’s been coated with a thin layer of zinc. The zinc prevents oxygen and water from reaching the steel, thus reducing the risk of oxidation. It also reacts directly with oxygen and moisture to create a layer of zinc oxide called a “patina”. The patinated layer then protects the underlying metal against corrosion.

Besides using galvanized steel, car manufacturers coat their vehicles with paint and primer. These two create a protective layer so that the metal isn’t exposed to oxygen and moisture. Given these conditions, you would think that cars are resistant to rust. This is true to an extent, but not entirely.

If the car paint gets scratched, or if it is compromised by the presence of dents, it loses its protective quality. The metal underbody will be exposed to elements which may result in eventual corrosion.

The galvanized steel used to build the vehicle also loses its integrity through the series of processes it underwent, like cutting, bending, drilling, and heating. This explains why rust tends to appear first on the car doors and panels where the steel is visibly curved.

Your location increases your risk

If you live somewhere near saltwater (like the beach), or if it snows in your area and they use salt to melt the ice, then your vehicle is twice more likely to develop rust. Salt, when mixed with water, causes iron to lose its electrons more quickly, which then speeds up the formation of rust.

Where you park your vehicle also matters. As much as possible, keep it parked on paved surfaces. Avoid parking it on snow, grass, dirt roads, and other places where there is moisture..

How to protect your vehicle from rusting

The best way to protect your vehicle is to maintain your car’s paint job. Washing it once every 1-2 weeks, and wax coating it at least once a month, will help your car paint last longer.

If your car gets scratches or dents, have it repaired right away to prevent moisture from seeping into the exposed parts. Make sure that your car’s underbody is kept clean and dry, since road salt and grime can collect in these places.

Finally, consult your local auto body repair shop about possible rustproofing options. For instance, you can have your car’s underbody sprayed with tar, dripless oil, or drip oil to protect the car frame from moisture.

When Does A Bumper Need Replacement Rather Than Dent Repair? Will Paintless Dent Repair Work On My Car?
Scroll to top